How to Prevent Demagogues in the United States

First, fix the Electoral College. Many people still view the EC as some brilliant move of statesmanship worked out by our supernally wise founders back 1787. This is not supported by history. The founders of this country weren’t superhuman and the creation of the Constitution was just as messy, slow moving and controversial as today’s politics–this despite restricting the meeting only to white, male, landowners. 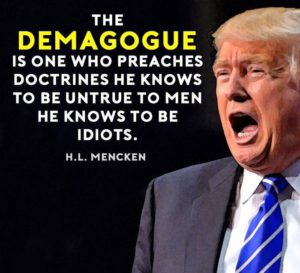 Instead the EC was a messy, last minute, hacked ploy to get the small states to ratify the Constitution. The EC has never worked as advertised. But abolishing it w0uld require a lengthy and difficult amendment process. But we do have an alternative way, that’s already in the Constitution (And has been since 1787.), to fix its most serious flaw: how electors are assigned. And this reform is already halfway to completion; we just need several more states to join in ratifying NPVIC laws. If this happens the EC vote shall always follow the popular vote.

Second, we need change how we vote for candidates in any political office. Currently, in most of the United States, elections for candidates are first-past-the-post, a system with many problems including gerrymandering, the spoiler effect and domination by two parties. Now, people have suggested many methods to fix specific problems, like gerrymandering or domination by two parties but, really, these two problems are strongly driven by the system itself: first-past-the-post.

But there is an alternative called single transferable voting that:

Several states and countries already have variations on STV in place and we need to make this much more common across the United States. These days there is a common refrain among voters that the system doesn’t represent them and they feel not stake in it. Representation of minor parties will bring these alienated voters back into the system. Not being worried about the spoiler effect will us all free to vote our conscience instead of handing victories to the opposition; this will also bring alienated voters back into the process.  And, as gerrymandering becomes a thing of the past, people will find their government more representative of their neighborhoods.

Third, we need to open the franchise and make it easier for everyone to vote. Voter fraud is a myth and is used to justify voter suppression. We need to either make election day a holiday or move it to the weekend. We need to allow for mail in voting.  Considering we have one of the highest percentages of population in prison, we need to return franchise to prisoners who have served their time.

Fourth, we need to bust the money and corruption out of US politics. Make no mistake our country is now in the hands of a small number of oligarchs, the Gilded Age has returned. Laws don’t get passed by popular assent anymore, instead it depends on who has the most money.

This can be fixed in a wide variety of ways. We can start at the local and state level and eventually push the anti-corruption reforms all the way to Federal level.  In fact, fixing points one through three might go some of the way there.

So, if we fix the electoral college, change the way voting works, broaden the franchise and bust all the money and corruption out of politics, someone like Trump won’t happen again–at least for the near future.

This entry was posted in Miscellaneous. Bookmark the permalink.