2011 to The Present: The Virtual Living Room 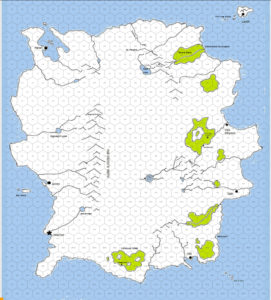 There was a roughly two year period between Summer of 2009 and early 2011 where I wasn’t running my game. This was because two key players once again moved away. But this time around there were solutions.

So this time around, it was easy for me to turn the entire planet into my living room.

But I was hesitant at first. I claim to be built for the future but, in the end, I’m just as reactionary as the worst of them! The real driver behind yanking me into the 21st century was my old, dear friend. It was him that “got the band back together” and made it all happen (Really!). But there were significant changes in the player lineup (with folks joining in from NYC, Bahrain, Thailand as well as members of the old Seattle Crew.) and that required that I create a new thread in Udra.

I called it “Going Postal” (And in later months, I plan to back-post the many, many recorded sessions from it so, keep checking the prior hyperlink!) and it was the first time Udra started getting well documented and the world building began to get formalized. “Going Postal” built off a plot excuse I used in “Circus of the Mighty:” The Royal Postal Authority. In the campaign calendar, it started in 6252 RCE.

Hinkwe Dolsalkhdie
As acting squad leader, he is a friend to all animals and a deacon to the God of Falcons. With supernal senses, his skill in archery is peerless! Born to the elf nation of Talithanth, Hinkwe joined the RPA’s Troubleshooters initially because it seemed like a fun gig. But his frivolity hides a devastatingly shrewd tactical sense.
Maceo Eh Xous
The brains behind the muscle, a scholar, bard, landlord and innkeeper. Born as one of the extremely rare Udran gnomes. He has been in the Queen’s Troubleshooters from the beginning, his arcane music has saved the squad many times. Modest in spite his profession, Maceo has almost singlehandedly changed the music styles of Udra.
Frickalind
Unshakable, unflappable, serene but always highly observant and never foolhardy, Frickalind is unnervingly calm in all situations. As hierophant and priestess of Crondussa, she has been with the Troubleshooters since the beginning. As the conduit of all manner of defensive and divinatory magic, as the claw of the Goddess of Eagles, Frickalind has saved the squad many times.
Bussell Hedgerow
Stubbornly whimsical, defiantly mercurial, Bussell has defied the dour stereotype of Udra’s halflings. A fire and mind sorcerer, gifted with unnatural sight and a richly appointed mansion in a pocket universe, Bussell has long considered himself the Troubleshooter’s psychological war officer or, if needs be, the architect of firebombing campaigns.
Lingerhol Keekway
A darkwood stalker well trained in the culture, languages and tactics of orcs, Lingerhol is never one to draw his weapon first. The half-elf is without doubt one of the best equestrians in Udra. It is rumored his steed, Tantalus, is in fact an infernal familiar with godlike powers. A man of extensive letters, he has yet to publish any of them.
Sir Stirge Barnaclesucker 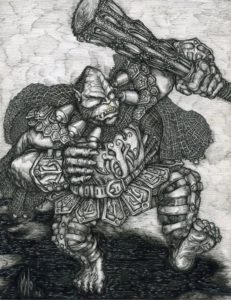 As RPA badge number #138, Stirge was the main close combat muscle in the days of the Circus. A long reformed half-orc pirate, herpetologist and businessman, he was rewarded for his long service to the Queen with knighthood and a seat on the governing council of the Isle of Jars. He reports only and personally to Baroness Hilda, his liege. He was been called back to service to join the Troubleshooters on their mission to find and destroy Chebo the Drowned. He has remained with them since.
Golath the Red
Cousin to Hendar the Heroic, fan of the exploits of Agent 101, Sir Arthur Trumblebone, Golath was RPA academy trained and scored the highest marks in the Civil Service Examination since its institution 13 years ago. He was immediately assigned to the Troubleshooting Squad but was soon replaced by Sir Stirge.
Hit Phar
A seven foot tall, giant walking slab of muscle, following in the footsteps of Sir Stirge, Hit was another half-orc to take a chance to better himself in the RPA. With the Troubleshooters from the earliest days, he was mostly known for his truly omnivorous eating habits, his huge appetite and his tendency to be cougar-bait. For reasons yet to be explained he was suddenly transferred to the RPA’s

2 Responses to Udra: My RPG Campaign History in Several Parts