The cliche of halflings in D&D is that they are jolly burglars and shoeless, gourmand hippies, following the vaguely Irish or Welsh culture given them by Tolkien. 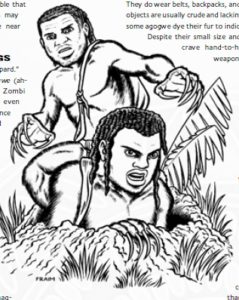 This is not so in Udra. In Udra, all the halflings came from the agogwe of Darth Lom. If their culture could be described in one sentence it would be this: African, dour, heretic burning Puritans all dressed in black hats and small swatches of white. Another way to think about them is to imagine the results of the following question, what if Frodo kept the One Ring? Imagine if he used it to forge a fanatical and xenophobic empire bent on ruling all of Middle-Earth?

A ridiculous image, to be sure, I mean halflings don’t have the strength and size to defeat the big folk in direct combat, right? But then again, neither do humans against giants and yet giants are rare and humans rule everything in most fantasy stories so, how does that work? Usually the humans don’t face the giants in direct combat unless vastly outnumbering them or, more often, just outsmarting them and finding weaknesses.

They are ambitious, rather than shy and retiring. They really want to rise high in the world rather let it pass them by. 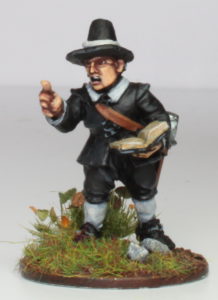 They are highly disciplined, given to religious asceticism and spartan life. They are secretive, shrewd and cagey. They only tend to fight when the odds are overwhelmingly in their favor. They are mostly “good,” in a Jerry Falwell, Cotton Mather, Salem Witch Trials sense of being “good.” If they are rogue or criminal, they tend to be mastermind bank robbers and con artists, rather than second story men. If they are military, they tend to favor hugely massed Roman and Greek infantry tactics and the largest horses they can safely ride, rather than guerrilla tactics. (But they’ll go in for guerrilla tactics if that’s what it takes for them to win.) If they favor the divine or the arcane, they tend to go for the most ambitious, scholarly, dangerous, esoteric, and above all, powerful magical training or tend to be fanatical inquisitors, religious teachers or ruthless, controlling theocrats.

They are well aware of their limitations and tend to always put themselves in situations where they have a clear advantage. They’ll cheat. If a Udran halfing soldier is in a stand up fight with a human warrior, you can be sure the halfing is fighting with a poisoned blade or has worked out some way to push the human off a cliff. They are short, but somehow exude an reputation darkness, lawfulness and just vaguely creepy. “Cute” is usually the last word you’ll think of.

They aren’t barefoot. They tend to wear the biggest, highest hip boots they can get away with or big buckled shoes.

Of course there are some who defy this cultural stereotype.  You will find some halfings in Udra that follow the Tolkienesque idiom and others that are more primal like their ancient agogwe roots but most are short,  Mennonites or Puritans.

Their halfling advantages are a bit different from those in the book. They tend to be stronger and less dextrous, so no bonus for dexterity or penalty for strength. They favor the class of cleric, not rogue. They have very thick and tough toe and finger nails, these are usually clipped short but can be allowed to grow giving them advantages to dig and fight with. But other than that, they are more or less the same in their halfling traits.