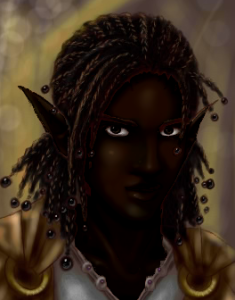 Elves, in general, are rare in Udra, being outnumbered by other humanoid species. They are really only found in any numbers at all in the Talithanth Forest on the middle east coast of Udra. This area, by royal edict and ancient treaty, is given to them to rule as they see fit. There are three types of elves in Udra, all of which speak the elven language:

Udran elves, don’t follow a quasi-medieval European culture but instead follow precolonial, native African cultures like, Egypt, Mali, Zimbabwe or Meroë. They love jewelry made of gold and lapis, usually of quasi-Egyptian bird, hawk and sun motifs.  Udran elves have an affinity for magic but are more likely, especially the wakyambi elves for ancient historical reasons, to follow divine magic rather than sorcery, wizardry and arcane sources. They’re favored class is cleric, not wizard. (Other than that, Wood Elves follow the specifications in the PHB. Wakyambi follow the specifications in Chris Dolunt’s Nyambe: African Adventures. Sea Elves follow specifications given in the MM.)

There is some friction between the different cultures of elves in Udra. The Wakyambi are viewed by the other elves as rather haughty and aloof, even for an Elf–although this may be hard for a non-elf to notice. The Wood Elves are viewed, although this is never said publicly, certainly not in the hearing of non-elves, as betrayers of the old ways, upstarts and as dangerously prone to insanity. The Sea Elves are especially xenophobic, mistrustful and slow to befriend, even for elves.

There are some elves that have come to prominence in human lands, one is Duke Theramir, a Wood Elf and the ruler of the city and canton of Nah. Although there has been no proof, it has been rumored that in his youth, nearly a century ago, before he came to power, he was prone to the insanity of his kind. Another is Lord Mandark, a half-elf, a rogue and a troubleshooter for Queen Ellen and, again, prone to some eccentricities.

There are no Grey Elves, Wild Elves or High Elves, as described in the Monster Manual, anywhere on the world of Ednom, not even in myth or legend. They don’t exist.

But just recently D&D’s infamous, subterranean Drow elves have been discovered–hiding deep in caverns below the city of Waylon. The Drow, even among the histories of progenitor Wakyambi elves are pure myth. Only among the oldest stories tell of pitch black skinned elves of white hair in Darth Lom. The story goes they are not of Ednom and not of the gods of Ednom. The story is they were strange allies summoned by the Kosan more than 60,000 years ago. The story is they were alien creatures coming from some other world only the gods knew of, perhaps another universe or plane of existence but, until now, not one exists anywhere in Udra.