See parts one, two and three.

After two players left, and the arrival of a new one, after making the transition to D&D 3.0, and later 3.5, I had started two new threads “City of Doors” and “Circus of the Mighty.” 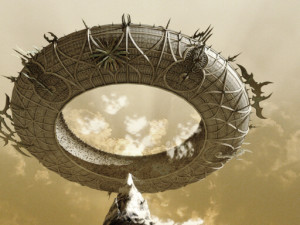 An image of Sigil, the City of Doors. I have no idea how this was taken considering how tall that mountain is.

City of Doors wasn’t about Udra, instead it was based in D&D Planescape campaign. Planescape was one of the few prefab campaign backgrounds TSR made that I really liked. Mostly because it departed so strongly from so many fantasy tropes. Given the assumptions of how original AD&D 2nd Edition cosmology worked, Udra (My campaign) exists within a universe that’s part of the larger multiverse that Planescape was all about so, in that sense the two are ultimately related. I’ve have had several Udran characters (Beginning with Duke Theramir and several of his associates way back in the early 80s.) make trips to the Ethereal, Elemental, Astral, Abyssal and Baatorian planes of existence.

But in the City of Doors plot thread, I had a party of six heroes from various universes (With one, a human ranger called Sleen, from Udra.) in the prime material plane. This plot thread lasted for about two years of play, with the overall plot left unresolved. The players were mostly meticulous notetakers so, I have a vague idea where things left off. The RPA Badge of Arthur Trumblebone, Agent #0101, still MIA. Obviously the Roman letters are there for our benefit, I haven’t yet invented an Udran Alphabet.

One of these days, I shall start another thread here.

Circus of the Mighty, begun in late 2003, was a new campaign thread that I began with three participants, playing characters that were former members of an Udran traveling circus. Almost immediately two players dropped out but the remaining player went on join new players in a party of new characters who were officers in the newly formed Royal Postal Agency.

Significant Udran events in this period

Significant Sigilian events in this period

This entry was posted in Circus of the Mighty, Games, Personal, Udra, Udra's History. Bookmark the permalink.