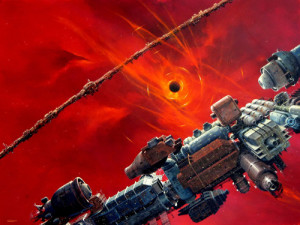 This is a painting of an artificial ring around a black hole. The concept art is by Philippe Bouchet. It’s not entirely accurate as there would be large optical distortions, especially on the far side of the ring, caused by the hole itself.

Are extraterrestrial civilizations building particle accelerators around black holes, and can we detect their use? Astrophysicist Brian Lacki at the Princeton Institute for Advanced Study speculates that we may actually ask and answer such questions. He proposes that if such accelerators are operating they will generate extremely high energy neutrinos. These neutrinos would have energies equal to ten to the twenty-eighth power (10^28) electron volts. This is a septillion times more powerful than the Large Hadron Collider.

The point is that, aside from the Big Bang itself, there are no known natural sources of neutrinos in that energy range. Lacki thinks that if we can find some, they are almost certainly generated by artificial means. They can serve as observational proof for questions concerning SETI, that hyperadvanced alien civilizations exist elsewhere in the universe. Lacki thinks we can build the means to detect the passage of such neutrinos by strewing a 100,000 hydrophones across the ocean floor. These neutrinos are so energetic that, unlike their lower energy cousins, they actually interact pretty strongly with ordinary matter. This means we’ll actually be able to hear the noise as they pass through water.

Another possibility, although less sensitive, is detect the secondary showers of particles as such high energy neutrinos make as they smash into the Moon’s surface.  And such observations are already under way with the NuMoon experiment.