Chairman Mao made everyone in China ride bicycles. It was probably one of the few environmentally sound decrees he made. I heard that his population growth policies weren’t very smart but, he was the champion of bicycles. Now the situation in China has reversed itself–sane birth control policies yet everyone who can afford one is allowed to buy a car. 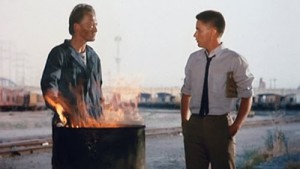 Remember Repo Man? In that movie the mechanic, Miller, declared, “…I think a lot about this kind of stuff. I do my best thinking on the bus. That’s how come I don’t drive, see?” Otto replied, “You don’t even know how to drive.” To which Miller rebuts, “I don’t wanna know how. I don’t wanna learn. See? The more you drive, the less intelligent you are.”

No truer words spoken. This from a man who lived in Los Angeles, a city whose urban plan seemed to think that there was no other form of transportation except cars.

One third of all carbon dioxide emissions in the United States comes from the transportation sector. If the world were to bury its cars tomorrow, we’d probably cut greenhouse emissions by a similar amount. Think of all parking lots and garages that could turned into free land again. Suburbia, and all the wasteful, wetland-destroying, mudslide-inducing, uninsurably-cheap-floodplain-buying, land use that it embodies, would die without cars. People would have to move into cities again. And that is an environmentally sound thing.

Did you ever notice that car ads never show cars in traffic jams? Yet the reality is that most of our time in cars is spent waiting in line or searching for a place to park. 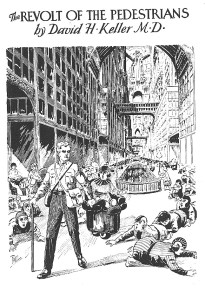 A healthy man striding among a bunch of couch potatoes. My kinda future!

I don’t drive, see? I fail to see the attraction. If I live in the city, everything I need is within walking distance so, why drive? With no gasoline to buy, no parking, maintenance or insurance to pay for I save a lot of money. Money I can spend or save.

I’m pretty darn healthy too. I don’t have to spend any money on health clubs or massage therapists when I walk and run nearly everywhere I need to go.

I think we’ll all look back on this century as the era of the rise and fall of the personal locomotive. Onsite production and communication will eliminate the need for much of the driving anyway. I’m willing to lay five bucks on it. The car is dead. You’ll see.

Human beings aren’t reliable enough be put in charge of several tonnes of case-hardened steel. Until robot sensing and navigation improves we should restrict the number of drivers to keep them as few as possible. Drivers should be elite professionals like airplane pilots. Most of us idiots can’t cut it and should be riding trains and buses instead. I think that at one time or another most drivers think all other drivers are idiots. Why deny it? It’s true. Most drivers are idiots and shouldn’t be behind the wheel. Leave it to the professionals and ride mass transit instead. You get rid of a lot of needless stress and get a lot more work done!

If it were up to me, we’d all be living in 2 kilometer tall arcologies surrounded by unspoiled, open land instead engaging in this atavistic, steel horse worship!

This entry was posted in The Future. Bookmark the permalink.