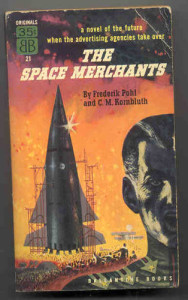 Advertising is everywhere these days. It’s becoming like that Pohl and Kornbluth story, where advertising was even on the wallpaper and toilet paper. I think it’s gone far enough. I think people should be allowed to pay more for no advertising at all. Think about it. You pay for cable right? Wouldn’t you be willing to pay a little more not to see any ads on cable at all? Maybe we should demand that. Maybe we should demand to pay more not to see ads before movies–or “prominent product placement” in movies. Maybe there should be a movement towards paying more not to plagued by ads.

How to block those damn banner ads!

And you can do the same thing on the Internet. There are banner ad blockers that people can add to their browsers to prevent banner ads from loading or displaying. To find one for your browser and system, visit Junkbusters (The code of Internet Junkbuster has since moved into SourceForge and many improvements have been added. Go take a look!). They have a list and advice. Their Internet Junkbuster proxy is free and does lots of great things to control your electronic wake. There is also a more user-friendly version of this technology called Guidescope.

You can also use style sheets to hide banner ads on your site, if you are forced to display them. Just use IMG {display: none;} and then set up a class with the rule {display: inline;} for your images. Your images just call the class and are displayed. Of course this only works for browsers that support style sheets.

A client-side script to stop those annoying popups 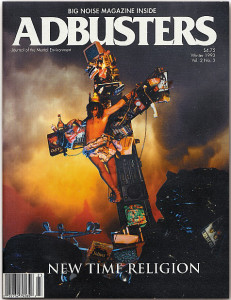 Bothered by those annoying popups on “free” web hosting sites? Do you wish you had something to stop them from bothering you?

Some browsers and some browser plug-ins allow you to adjust your browser’s security depending on where you are. For example, you can tell some browsers to shut off page scripting and Java support while in some particular location. For example, a site or even a whole domain. These browsers and browser plug-ins will switch scripting and Java back on once you leave that domain or site. Take advantage of that. If you have that ability at your disposal, you’ll never be plagued by popups or branding watermarks again. Of course the drawback is that, in shutting off the popups, you shut off everything else, included scripts you may want to see. Oh well.

Another thing you could try is to fight fire with fire. 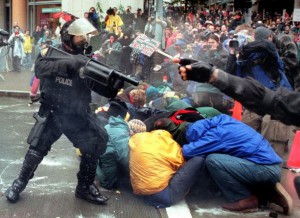 I was at the WTO demonstration in Seattle. It really was as bad as all that.

ThirdVoice would actually be a neat idea if it was done better. I loaded it the other day and tried it out. I saw a few neat things that people said about sites but, mostly I saw junk notes–spam, I guess you could call it. It is a neat idea to be able to annotate sites with your own personal notes (sort of like writing notes in the margin of a book). It is also a neat idea to be able to comment on specific passages or objects in a site and have that commentary be seen by other people. But there are two problems to be dealt with:

ThirdVoice claims to be improving the software so that it will somehow answer these two problems. Until then, Michel van Baalen, Christian Graham and others offer page scripts that block or other wise disable ThirdVoice.

Actually, savvy guy that I am, I heard about the idea of Web annotation long before ThirdVoice claimed to have invented it. There’s a server based tool called CritSuite that was invented by some folks over at The Foresight Institute. I read about it in a newsletter in ’96. They posted their first annotation in ’97, nearly two years before ThirdVoice made their claim to be first.

CritSuite behaves like ThirdVoice except it isn’t client-side and as such it doesn’t depend on which browser you’re running. It’s truly interoperable and can even work with Lynx! Also since CritSuite is currently being run and supported on servers that belong to a non-profit organization of scientists and engineers, that is, Foresight, I have better assurances of the quality of the annotations and notes. Also the notes can be moderated and the application is open source, which means you can download the code, tweak it, compile it and run it on your own server! How’s that Third Voice? If you want to boycott ThirdVoice, yet like the idea of Web annotations, try CritSuite.

Maybe a better way of doing site annotation is allow the Web author maintain control by running the service on the site. There are already some applications that do this.

Addendum: Since I wrote this in late 1998, things have changed. Web annotation technology has continued to progress yet it still remains deeply problematic. 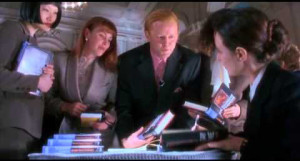 “I think, Dr. Railly, you have given your ‘alarmists’ a bad name. Surely there is very real and very convincing data that the planet cannot survive the excesses of the human race: proliferation of atomic devices, uncontrolled breeding habits, the rape of the environment, the pollution of land, sea, and air. In this context, isn’t it obvious that ‘Chicken Little’ represents the sane vision and that Homo Sapiens’ motto, ‘Let’s go shopping!’ is the cry of the true lunatic?”

There are a few things you should know to prevent your e-mail box from being filled up with unsolicited bulk e-mail:

This entry was posted in Security and Privacy, The Future. Bookmark the permalink.