Molna’s Test of Strength, The Hights of Idiocy, Goblin Return: 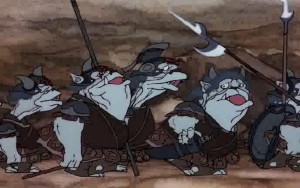 After defeat by the goblins, the Circus beat a hasty retreat down the trail back to Skidrow. On the way down, they ran into Kinsaul, their comrade from earlier missions of a postal nature. Kinsaul had be sent up by Yavin to lend the Circus a hand in fighting the goblins. The party regrouped and headed down the trail. The party found a suitable ambush spot just off the trail on a rock outcrop. They made camp there and waited for any goblins to come down the trail.

The night passed uneventfully and the party used the morning to conduct what further healing remained. They continued to wait. In the early afternoon, the Circus spotted 3 goblins, 2 skeletal wolves and a flag of truce making their way down the trail.

Thalin cast a message spell to parley with the goblin they recognized as being the priest who taunted their hasty retreat before. Through Thalin’s message spell, negotiations ensued. It was learned that the goblins, flush with victory and meeting from a position of strength, were on their way down to make deals with Skidrow. It was also learned that there was some recent political changes in the goblin leadership*. Negotiations continued, members of the Circus conferred and Thalin demanded some kind of proof of good will on the goblin’s part.

Here negotiations broke down–in part because some members of the party just wanted to kill all the goblins and thus end their raiding once and for all.

Combat broke out. Within a minute all the goblins and their undead bodyguards had fallen. All but one. The party tried to question the goblin but it developed that only the priest goblin knew the language of Udra.

After several, rather humorous false starts with sign language on the part of Kells, Thanator and their goblin captive, the Circus decided to take the captive back to Skidrow for Yavin to question. Yavin was the only one who knew the language the goblins spoke. Yavin questioned the goblin and got an estimate of their numbers and a rough map of the caves where they laired. The party turned the goblin over to Yavin and his assistants, then made preparations during the night for another assault on the caves.

Early in the morning however, they awoke to the sound of bugle calls ringing down the mountainside. The Circus knew that the sound meant that the goblins had realized that their negotiation party had failed and that the goblins were now rallying for some kind of assault on the town of Skidrow. The party only had 8 hours to prepare.

The party, and Yavin, quick-marched for 2 hours back up the trail to return to their earlier ambush spot and spent the next two hours moving debris to block the trial. They also set up rocks, debris and oil to avalanche on the trail from their position on the rock outcrop.The Circus finished with only minutes to spare as they caught sight of a huge, marching column of goblins, banging their armor rhythmically, coming down the trail.

Thanator cast change self upon himself and posed as the goblin priest, described earlier. Yavin, according to plan, began barking out orders to halt in the goblin tongue. The scheme was to confuse the goblin ranks into thinking new orders had been issued or that priest was being held captive. It was meant to be a distraction until the Circus had the goblin ranks right were they wanted to spring the traps they’d spent the last 2 hours preparing. 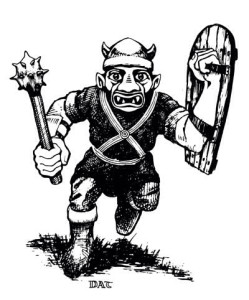 This ruse worked and the goblin column halted and fell into disarray. One of the goblin officers forced his way to the front to try and regroup the column. At that point the Circus sprang their two of their traps.

Dwalor, during the preparation time, had worked to chop partway through a tree directly adjacent to the trail. He finished the job with two wacks from his ax and pushed the tree down onto the head of the goblin column. This crushed several in the front ranks. Thalin cast a jump spell on himself, along with two armoring spells he had cast just seconds previously, and lept into the confused ranks, scything through the milling goblins with burning hands.

Chingara and Thanator fired missiles at the goblin they believed to be the officer shouting orders to regroup. Arthur cast his spear at the officer as well. Kells and Kinsaul, not having missiles, stood at the edge of the outcrop waiting to repel the goblins they knew would come scrambling up to take it.

The goblins regrouped, massing to assault the outcrop. Goblin peltasts formed ranks to rain sling stones down on outcrop where the party was located.

Chin and Thanator fired more missiles, attempting to the thin the forming ranks. Thalin cast one more burning hands but found himself surrounded. He leapt out of the fray to return to the top of the outcrop. Dwalor scrambled back up the outcrop, ready to repel any assault. The remainder of the Circus held their response waiting for the goblins to assault the precipice.

First, the goblin peltasts showered the Circus with stones and then the goblin infantry rushed the precipice. Their advance was not a clear charge though because, the tree Dwalor felled onto the trail forced them to charge in a poorly massed formation. Kells, Kinsaul and Arthur, standing on the high ground proceeded to beat back the climbing goblins.

Dwalor joined the others in repelling the assault. Thalin cast a grease spell and thus rendered on face of the slope useless to climb. Several goblins fell from the magically slick face, throwing further confusion into the assault.

The goblins pressed again–the peltasts cast more bullets onto the height and the foots tried again to scramble the slope. This happened several more times. The Circus cut down many of the goblin infantry but the goblin peltasts were slowly eroding their strength with small, steady wounds.

Chingara began to return fire into the massed peltast formation. Thanator called his god’s bane down on heads of the goblins, shaking their morale. Thanator also asked for blessings of the Circus in this task.

But eventually the delaying tactics of the Circus won and the goblin assault broke and was cut down. The peltasts pulled back to rejoin the main body of the goblin army.

The Circus knew that, though they had killed more than forty goblins, they may not be able to stand the main bulk of the goblin army, for they saw another twenty peltasts joining the ranks of the withdrawing peltasts.

According to Yavin’s estimates another 60 goblins remained plus an unknown number of leaders. it was decided to retreat to heal and restore their magical energies. 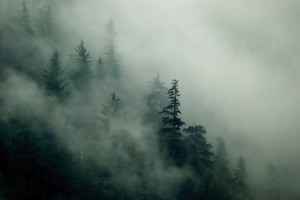 Thalin summoned an obscuring fog to hide the party’s retreat and they fled deep into the forest to hide. They healed what they could and spent a cold night with no fire deep in the forest. As the dawn broke, they were dead tired and in the cold they had healed nothing.

As they gathered their bedrolls, there were many unanswered questions for the Circus. Some thought it possible that the goblins, loosing more than half their numbers in the past three days, might take their remaining force and flee to safer territory. Some members of the party hoped that the goblins remained–feeling a lust for more battle.

They began to make plans on how to meet the goblin force again later that day.

* It turned out that recently, how recently no one knows, that the goblins had been lead by a matriarch and priestess, named Mim. She was apparently cast down and likely assassinated by her former right hand, Gout-knee with the collusion of rival priests and priestesses.

This entry was posted in Circus of the Mighty, Games, Udra. Bookmark the permalink.