My Return from The Hoh Valley Death March 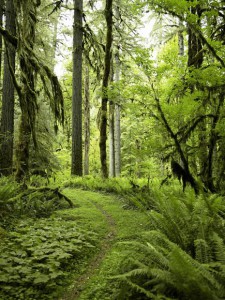 Normally I don’t do status reports because I’m not famous and usually I have nothing noteworthy to report. But I promised some of my comrades this, so here goes:

On the morning of Friday, the 8th of May, my trip the Hoh Valley Rainforest began. I was picked up around 6:45 AM and we gathered people and gear until there were four of us with packs massing at 15 to 25 kilograms each (As the out of shape newbie, I was given the lightest.). We then took the ferry to the Olympic Peninsula and then drove along Highway 101 towards the Hoh River Trailhead.

Conversation in the car ranged from home renovation and submarine crush depths, to FAA horror stories and jokes of a scatological nature. All this was liberally sprinkled with hiking boot and fishing gear minutiae. This is what happens when you’re the designated, middle aged, non-engineer riding with engineers.

At the trailhead, we packed up and then we hiked about 8 klicks to a designated site named, appropriately enough, “Five Mile Island.” Naming important features on maps is a bit like naming planets or stars in the universe. After a while, you realize there are simply not enough phrases or names in the English language to name the amount of crap that’s out there. There we set up camp.

Setting up camp consists of finding a good rock free spot for your lightweight composite space age tents, setting up your tiny ultra modern water filtration system, finding fire wood and listening to Beck and War on someone’s smartphone.  Mostly I was kneeding my feet or finding excuses not to get up anymore. One of us rewarded the others with 4 New York cut steaks cooked over tiny Alder chips.

Discussion ranged from concerts and music, more engineering and hiking minutiae, endless ribbing over ancient shared memories and continued jokes of a scatological nature. And the drinking of a few shots of whiskey, vodka and tequila.

Hiking is not like walking on sidewalks. Hiking is very aerobic, a sort of mix between marching and stair climbing. You sweat and go through huge amounts of water. The distances covered by hiking seem small by pedestrian standards in the city but moving by foot in the wilderness is an entirely different order of thing. Sidewalks are an enormous convenience. Free of big thick roots or hunks of rock, sidewalks don’t require your feet to twist or bend much to secure a stable position for your next stride. This lets you get away with truly puny footware. 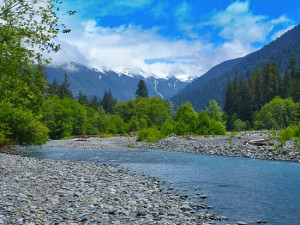 Hiking through the brush? Then you’d better get some proper shoes or you’ll pay for it.

My shoes were not hiking boots but were actually pretty good with thick stiff soles. That first march in was fine. After a day hike, another 8 klicks beyond Gravel Bed to the Olympus Ranger Station, on Saturday, my lack of exercise and poor shoes began to tell. Day hikes are where you only pack a small amount of gear, mostly water, in a belt pouch.

At the station three of us, including me, stayed behind to play in the river and make comments on elk poop. One of us, Mr. Super-hardcore, hiked roughly another 3.4 klicks to somewhere up by Lewis Meadow. We waited for him. I didn’t feel an iota of shame or envy.

The hike back was endurable but I was about 15 minutes after the others in returning to camp. The evening consisted of lots of sandwiches made of Gouda and salami of various sorts, peanut butter and jelly, dehydrated astronaut food like beef stew, trail mix and fancy s’mores. Conversation was similar to Friday night and there was more drinking. More music from the aforementioned smartphone–a little Floyd, some soul gospel.

Our camping spot grew more and more crowded by Sunday morning. We packed up and hiked out by 9:45 AM. My friends did this all with very efficient and practiced air.

At the trailhead we drove out. We stopped briefly at Forks (Yeah, that Forks. Honestly I was underwhelmed.) to order a pan pizza and some Mac and Jack’s. It was a Sunday Mother’s Day; service was slow but the pizza was tasty enough. Hunger will do that to you. 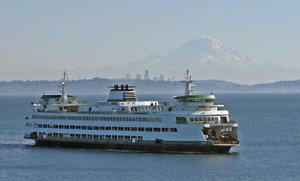 Conversation in the truck back was dampened, at least for me, by sleep deprivation and leg soreness. I fell asleep on the twists of Highway 101. Every time we took a stop I stretched my calves as best I could.

On the whole it was fun. I genuinely had a good time. No heart attacks or strokes happened. I saw some cool things. The company was enjoyable and supportive. I was surprised, given my lack of intense walking exercise over the last two years, how well I did.  Things hurt at the end but not paralyzingly so. But I’d still prefer to keep this to a once a year thing. I’m an urban rat, not a granola boy.

2 Responses to My Return from The Hoh Valley Death March