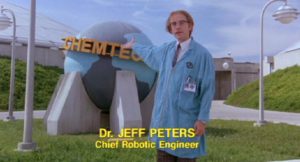 “You see, I’m not very good with people,” Jeff Peter’s last significant exchange with Earth and, I think, one of the saddest lines in the last 30 years of–ugh, I hate this expression–chick flicks.

This strange but hopefully reassuring essay was prompted by an exchange with a friend via the shallow artificiality of Facebook. I guess it could have been worse; it could have been prompted by the shallow artificiality of Twitter or some other part of the Internet.  Anyway, afterwards, I felt the need to explain a few things about myself and my emotional outlook that couldn’t be properly conveyed by way of the train wreck that is the Facebook “Status form.”

Anyway, let me share with you the bitter rant of Dr. Jeff Peters, a fictional character in the movie, Making Mr. Right, 1987:

“Look, Ulysses, I want you to remember that you are much more advanced than that woman will ever be. Do not let her drag you down to her level! She lives in an emotional swamp! But then, so do most people! Some minor activity occurs in the medulla, and–and wham! They think they’re in love. The next thing they know, they have 2 children and a canine. And then, boom! Some neuron misfires, and they’re divorced, miserable, and only get to see their children on Sundays. It is all chemical, Ulysses, and it is all a waste of time. You were made for grander things, pal. Do you read me?“

In the movie, Jeff Peters was essentially the male version of Dr. Susan Calvin, herself a brilliant, misanthropic, cynical, mathematician and artificial intelligence psychiatrist, in Issac Asimov’s fiction shorts about robots. (I suppose I could have opened this essay with one of Calvin’s rants from the short story “Liar!” but you get the idea.)

So let’s look at that quote for a few minutes and think about it. Yes, it is sad and bitter but, it is also in one sense true.

Everything that happens in our brains is electrochemical. Long before we were human, mammal brains inherited and premiered a lot of brain hardware to deal with courtship, social bonding, pack behavior, ethological behaviors, mating and so on. Long before there were apes, animals had culture and needed brains complicated enough to navigate such fluid and subtle changes. 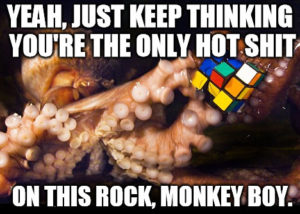 We inherited this. All of the world’s human cultures grew from these common roots. It’s not that humanity is the prime or only cultural species either, we are merely a very sophisticated one. As we have been learning, cetaceans, octopi, apes, birds and many other creatures give us a surprisingly close run for that title. This is what biology, ethology, sociology and anthropology have learned in the last five centuries. We are not magical. We are not the paragon of nature. We are deeply part of nature. We are a small piece of the universe regarding itself. Frankly, we’ve done a lot of terrible damage to ourselves and this planet in thinking we are the measure of all things!Love in all its forms is real. For some these beautiful, painful, joyous and subtle emotions, science has revealed evolutionary, ethological and biological reasons for them. Some argue say that science has taken all the beauty and magic away in explaining these feelings. I categorically disagree.

I’m with Feynman on this. Science instead gigantically amplifies that beauty, that wonder, that awe. I think knowing a few basic scientific facts and thinking through their implications (Which, I think, anyone can do provided it’s explained properly, something our educational systems all too often fail to do.) can be a profoundly humbling and emotional experience.

I’ve personally found it oddly reassuring. It puts my suffering into the right context and makes it not hurt so much. All the mistakes I’ve made, all the regrets? Small beer. Infinitesimally small beer. Perhaps it’s almost the religious experience of agape even though it’s all based in fact, requires no supernatural stories and it’s something that anyone, regardless of culture or history, can find. Science divorces magic from the supernatural. I say the magic is still there, and anyone, if they are patient enough, can see it. You just have to understand scientific facts and strongly, emotionally appreciate them on an artistic(?) level. We are dust that sings.

I’ve searched the Internet briefly and there seems no single, simple term for this concept or feeling. “To embrace the absurd?” “To love reality?” “Love of the world?” I don’t know. The Web is so crammed with heat and noise about Abrahamic cautions against loving the world or post-modern, New Age nonsense about “finding still points,” that it’s hard to find a simple entry on Wikipedia or a dictionary site.

Anyway, all this deep and emotional stuff got me away from another topic I wanted to talk about: infatuation, love and human courtship–for me stuff that’s not so deep but certainly emotional.

There’s a lot of personal history on these matters I could relate that I’ve never shared with most people, even my mother. Perhaps it may go some way to explaining why I feel and behave the way I do on this subject but, to summarize: I think the world’s cultures have layered long centuries of deep balderdash over these subjects.

Again I think this stems from our failure to separate the supernatural from the wonderful, the failure to separate the sacred from the important.
Nobody is designed to meet. There is no perfect “soulmate” out there to complete, magnify, actualize or enable you. Human beings are not puzzle pieces. There is only blind fate, blind chance and what we decide and do. What we are is imperfect, finite creatures that, if we work at it, can get along reasonably well with one another. And if we work at that last point, we’ll find ourselves in the quiet, mature love of friendship.

There really aren’t many pop songs about this kind of love.

It’s too often dismissed as boring. This is sad, because I’d say the loss of the mature love of friendship is the loss that hurts far, far more than some trivial, temporary tempest of infatuation. I’ve lived long enough to have lost friends to death and it hurts. It’s a quiet ache that’ll probably stay with me all the rest of my life.

Infatuation on the other hand, well–let me relate one personal story. It was the most new wave of years, 1982, I was 18 (or was it 19?), working as a dishwasher at a restaurant/delicatessen on Capitol Hill, I had the briefest brush with infatuation.

She was a about two or three years older than me, a short order cook and, briefly, waitress who liked Kurt Vonnegut. I thought she was pretty–which is to say cruelly, without poetry, politeness or magic–she was a husky farm girl type, chubby, strong and stocky with that wonderful “wet suit” layer of nicely arranged body fat–Rubenesque, voluptuous, zaftig, an hourglass. She’d’ve probably hated to be objectified in that way. I’d’ve been utterly mortified to even state such shallow preferences. I still am. This current essay is probably my first public statement of such preferences. I hated making it. My crab brain, to this day, has a lot to apologize for!

Anyway, appearance alone wasn’t what triggered the infatuation. No, for me, even way back then, I wanted a women who was at least as smart as me. I was a guy nerd looking for a gal nerd. But I wasn’t nearly as smart or depthy as I thought I was. No, because what triggered the infatuation was her, in the lull between lunch and dinner rush, strumming and singing the opening bars of Pink Floyd’s “Wish You Were Here” on a guitar she brought to work one day. Gah! I wince to even think of it!

This lead to a couple evening’s worth of intense speculation as to how I’d approach her and what I imagined her inner life to be like. I even wrote a few half finished letters to her. Absolutely none of this did I voice to her or anyone else. After about a week or so of this, I realized it was entirely self-induced. I realized that infatuation has nothing to do with the person you’re obsessing over. You’re just making it up.  This was one of my early brushes with wisdom.

Since then I’ve never fallen in love with anyone ever again. I’ve come to love, I’ve grown to mature love, the love of friendship–in my opinion the only love that matters. But I’ve never been capable of such flights of fancy ever since. It’s a neurochemical con job. In primordial days mammals evolved infatuation to get themselves to bang the genes together, then we’ve layered a lot of muck and schmaltz on top, but it’s not something to build a lasting relationship on. It’s a distraction we’re better off removing when we refactor our brains one day.

Anyway, I just wanted to explain why, when I cited the “neurochemical con job” GIF file, sure, it was bitter. But I thought it was funny–and somewhat true.