Fear of a Black Planet 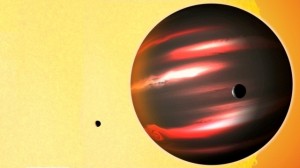 So they’ve found an extrasolar planet 750 light years away that surprisingly dark despite being so close to its sun. The planet is a jovian or superjovian (A gas giant, like Jupiter or Saturn.) only about 4.8 million kilometers away from its star. That’s barely a tenth the size of the orbit of Mercury. It’s so black that it barely reflects back less than one percent of the light that falls on it. The planet, called TrES-2B, was first found by the Kepler satellite and, due to it’s nearness to its sun, is heated to over a 1000 degrees centigrade. Our current thinking about such hot, jovian planets that close to their parent stars is that they must all be dark. Their atmospheres are likely composed of light absorbing chemicals like sodium, potassium, and titanium oxide vapor. Even still, we never yet found an extrasolar planet this dark before. It’s a record setter.

Anyway, I just figured I’d share that interesting astronomy news on my birthday! In other good news, the SETI Allen radio telescope array is back online again.

1 Response to Fear of a Black Planet