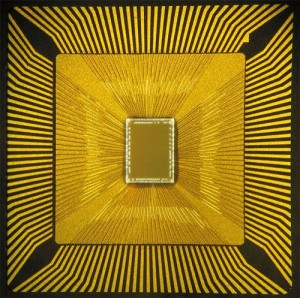 So I just learned that IBM has built a new kind of experimental silicon chip that more closely models how neurons process and communicate information. Now, as a hard science fiction nerd, I’ve talked about computational neurology and the Blue Brain Project before but,  this recent news seems particularly exciting to me because building something like neural synapses in hardware seems to give us much greater speed for certain tasks than trying to model synapses in software.  Neural models in software are on conventional computers, with their switch based based logic gates.

I think the Blue Brain Project points out the inefficiencies of this when it takes 600 teraflop (600 trillion calculations per second.) supercompter, one of the most powerful on the planet, to properly simulate one cortical column consisting of 10,000 neurons in the brain of a rat. If we could actually burn good approximations of these neurons directly into silicon, things might go faster and take much less energy.

Does this presage the quick emergence of HAL, Skynet and Colossus? Probably not, there are still many details that need to be worked out. For example the Blue Brain Project is not nearly over and now has two new goals:

We may learn from the completion of these two goals many more questions that need to be answered before we can really kick AI research in the pants. But these neurosynaptic chips seem to me to be a big step in the right direction.

Related articles (Mostly repetitive but I link to them to counter link rot with redundancy.):