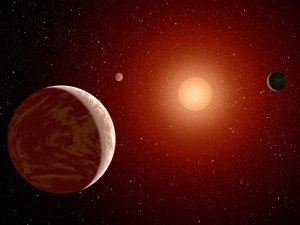 So our telescopes and probes are discovering estimated billions of terrestrial planets in the habitable zones around red dwarfs in our galaxy. Naively I’d think this would be good for the Drake Equation’s estimates of intelligent, technological civilizations in the universe because red dwarfs are more stable and longer lasting than yellow dwarfs like our sun. This would suggest that life on such worlds would have a longer time to develop into high complexity.

But it turns out there are problems, mostly dealing with gravitational forces and tides that manifest that close to a star.

Terrestrial worlds in the habitable zones of red dwarfs are subject to tidal forces which would prevent the emergence of terrestrial planets with mild tilts in their axis of rotation, like Earth. A mild axial tilt, not too large or too small, gives our planet seasons which moderate our planet’s yearly average temperature and keep it close to conditions which favor the existence of water in solid, liquid and gaseous forms. In the worst cases terrestrial planets in the habitable zones of red dwarf become tidally locked so they only present one face to their star while the other side of the planet remains in perpetual darkness. Or in other cases, the tilt becomes so small that the equators of such planets get much hotter while the poles remain in twilight which would keep them colder all year round.

Most of these assumptions are based on observational data and computer models based around what we know for planetary formation and geophysics. I suppose it might be possible that there are unknown astrophysical and geophysical forces around red dwarfs that might replenish free hydrogen on these worlds. There might be other factors that emerge that allow environmental stability on planets with very small axial tilts, very large axial tilts or tidal locking but at the moment, this is our models tell us: Life, as we know it, is unlikely around red dwarfs.