Hold on, Let Me Get My Tinfoil Hat 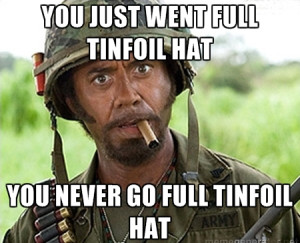 As has been related in several places, I’m a skeptic. I think this is noteworthy considering the era and cultural context I grew up in: San Francisco in the 1960s and 70s. My mother has this wonderful hippie expression for people who drift out of touch with rationality: “flying asshole crackpots.”

It wasn’t her expression. She actually learned it from this wonderfully funny band roadie by the name of Adrianne, who drove the tour bus for the Anonymous Artists of America.

There was the time my mother, a single mother in early 1970 (So no, I don’t blame her for any of this!), had to work in New York during the summer months so, she left me in the care of her close friends in this band, who, at the time, where living with many others in a commune in Colorado.  During this time, I caught Blue Disease (RMSF) from dog ticks. I grew deathly ill and the adults on the commune, all in their early to late twenties, had their reasons for not taking me to a hospital.

I think mostly it was poverty, rejection of Western, capitalist society and fear of the Man–several of them were Weathermen. So they kept me in a teepee, called in a friend of theirs, a young, Native American man to keep me hydrated, to keep me warm and cool and to chant over me and they gave my mother a phone call.

My mother had a nickname back then, “Glyn Straight.” This was because she always had her shit together and could be counted on take care of the serious business. She was a hippie but she knew how to pass in conventional, establishment culture. She was both a bank teller for Wells Fargo and belly dancer. I still wonder at how she pulled that off.

Anyway, getting the phone call, she immediately flew to Colorado, picked me up, took me down to the town doctor’s office and got me shot full of antibiotics, I was sick they wouldn’t let me on the plane back to San Francisco but I cured within days.

So what prompted this? Well basically this SMS chinwag between Neil DeGrasse Tyson and hiphop artist, BOB. Obviously I’m Neil’s side, Neil being an actual astronomer and BOB, being a pop star. Also I relate all this to explain why I think the way I do. As a little post-hippie boy, I wasn’t really predisposed towards being a skeptic but, my personal history being what it was, I think it filtered in over the years so that by the time I was in high school, I was militantly skeptical and atheist.

This entry was posted in Personal, Science and Engineering. Bookmark the permalink.

1 Response to Hold on, Let Me Get My Tinfoil Hat