After nearly a century of searching, gravitational waves have been discovered. Finally an important prediction made by general relativity in 1916 has been confirmed. This matters in at least five possible ways.

So let’s look at each of these in turn.

Science loves to check, double-check and triple-check long established models because, that’s a very good way to discover new things we didn’t expect. Science is often about serendipity. Over the last 125 years there have been many learned people making predictions about the end of science, most recently with John Horgan and perhaps much more infamously with Lord Kelvin’s pronouncement, months before Max Plank’s solution to the black body radiation problem, five years before special relativity, eleven years before general relativity and twenty years before the formalization of quantum mechanics:  “There is nothing new to be discovered in physics now. All that remains is more and more precise measurement.”

Science is also about consistency. Everything we theorize must be as consistent and air tight as possible. The logic must be rock solid and with as few gaps as possible. This is why when it turns out that a theory was wrong in its basic assumptions so many other, seemingly unrelated things in science collapse and need to be re-examined again. The scientific knowledge we build up has to as tightly woven and interconnected as possible so that we don’t miss something. This logical consistency is checked all the time with new experiments to see if we can find any new gaps in our understanding and assumptions.

General relativity made many predictions back in 1916 and, since then, many of these have been checked and confirmed with brain melting levels of precision. The ones that were confirmed were enough to reassure physicists that Einstein had get the picture right: relativity is real. And now gravitational waves are another fact to throw on the huge pile of evidence for relativity’s accuracy.

The point is not only to confirm relativity in a new way, it’s also a search for gaps in our understanding. If we find data that doesn’t match relativity’s numbers in the Nth decimal place, we may have discovered something new. More and more precise measurement discovers new things all the time. Kelvin, a physicist who should have known better, was too quick to dismiss this.

Gravitational waves have been so notoriously hard to find because gravity is so weak. The LIGO apparatus, the instrument designed to detect these waves, is so sensitive that it can sense distortions in the fabric of spacetime as small as one tenth of an attometer, 10,000 times smaller than a proton. It has to be this sensitive because even a collision of two black holes, each roughly 30 to 35 times the mass of the sun, deep in the core of a distant galaxy 1.9 billion light years away has the wave amplitude weaken by distance and the inverse square law. 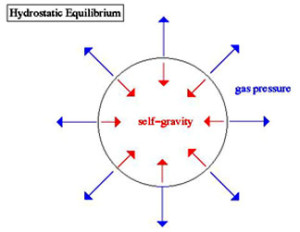 But gravity itself is also weak comparatively speaking. General relativity predicts that the amount of power the Earth loses to gravitational waves from its orbit about the Sun is about a milliwatt each year. This is an absurdly tiny loss and so Earth’s orbit is essentially stable over billions of years and we can mostly neglect it even over enormous time scales. Obviously the electromagnetic forces holding your body together are strong enough to keep the gravity of the Earth from crushing to you a pulp. The molecular bonds in the beams of steel and wood are strong enough to keep the building you’re in from falling to rubble. The electromagnetic and nuclear forces are what keep most stars from collapsing into black holes. If gravity were strongest, the universe would be a very different place.

Gravity is weak and that’s why it takes LIGO’s dumbfounding levels of sensitivity and huge masses the size of stars colliding to generate waves big enough to detect.

The Very Big and the Very Small 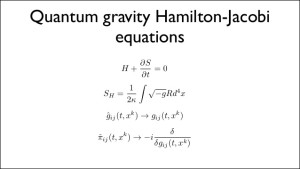 General relativity is ideal for understanding the behavior of very large objects like galaxies, dark matter and energy or the universe itself because for such cosmically huge collections of atoms and particles, quantum effects can be mostly ignored.

In the subatomic realm, quantum mechanics is ideal for understanding how things work because masses are very, very tiny and spacetime distortion from gravity can be mostly ignored.

But this leaves a gap. What about things that are astronomically massive and yet subatomically small, black holes for example or the Big Bang itself? This is currently where our understanding of physics breaks and stops working well. And to fix that, we need a new model: quantum gravity. Quantum gravity will be the tool that finally unifies the mathematics and physics of general relativity and quantum mechanics.

Physicists, even Einstein himself, have been trying to unify and reconcile what general relativity says and what quantum mechanics says for about 70 or so years now. This is one of the reasons why they are so interested in black holes and the Big Bang because in those two examples, we things that combine the physics of both.

And gravitational waves, and finally being able to measure their strengths and properties, is going to figure into this work. Remember that I said that LIGO can measure spatial distortion on a scale 10,000 times smaller than a proton? That is exactly region where we need to start exploring and measuring things as precisely as we can. It’s both subatomic and gravitational.

The data gravitational wave measurements gives us will have impacts on our understanding of the Big Bang, black holes, dark matter and energy and may finally give us the facts we need to build a theory of quantum gravity that works.

In the 1960s, after we figured out how quarks work, physicists assembled something called the Standard Model, which is the set of rules that unifies our understanding of the forces of electromagnetism, the weak nuclear force and the strong nuclear force–three of the four forces of nature. Gravity is left out because we don’t have a theory of quantum gravity. 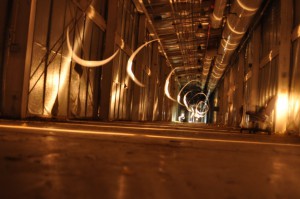 So when it comes to understanding conditions the tiniest moments after the Big Bang, before the Inflation Era or how things work inside the event horizons black holes the Standard Model breaks and we are forced to mostly speculate with no good predictions to guide us. This has been a problem plaguing physics since the 1920s.

But after the 1970s, there was a lot of hype about making a final theory of everything, a final model to apply to all of physics.

Before we got there, however, some predictions of the Standard Model had to be checked to see if we weren’t fooling ourselves. We needed to find and measure the Higgs boson. This question drove the failed attempt to create the superconducting super collider in the United States and did create the successful Large Hadron Collider in Europe. About two or so years ago we found the Higgs at the LEC and the Standard Model has been vindicated.

But of course this wasn’t the end of it. There are still an infinite number of questions that remain. And chief among those is understanding gravity in a quantum mechanical way.

I’m not an expert, but I think it’s premature to go rushing off into string theory, supersymmetry or any final theory at all before we finally take care of this nearly hundred year old, lingering sore in physics. And LIGO’s confirmation of gravitational waves might finally give us the data we need to solve this problem.

Or maybe not. But at least LIGO and its successors will discover something we didn’t know about before. And that’s where science is the most fun.

Speaking of new things discovered over the last 45 or so years, long before the ink was drying on proposals for the SSC and the LHC, astronomers made observations that many galaxies were rotating too fast and that the expansion of the universe was speeding up, not slowing down, like we thought. 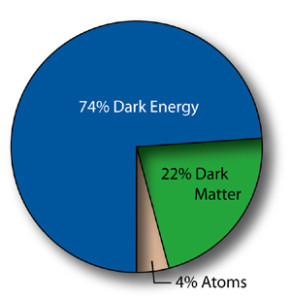 Galaxies were spinning too fast for the gravitation of their visible matter to hold them together. But something was holding them together so, the idea of dark matter was proposed. Dark matter has gravitation but is otherwise nonvisible and doesn’t interact with matter and energy. It’s composition is still mysterious to us although many ideas have been proposed.

Secondly, by using a specific type of supernova as a standard candle, which is far brighter than the Cepheid variables of Henrietta S. Leavitt’s day, we could measure distances and red shifts far more accurately. It was these that we learned of the cosmic acceleration. The universe is not only expanding it’s speeding up. To explain this, astronomers proposed dark energy that accelerates the expansion of spacetime. Despite this effect, it otherwise doesn’t interact with ordinary matter and energy in the usual ways and it’s composition remains mysterious to us.

However gravitational wave astronomy, now that gravitational waves have been confirmed to exist might–perhaps!–give us a way to explore these two new forms of matter and energy, which comprise 96 percent of the whole universe.

I didn’t talk about gravitational waves very much here. Mostly I was concerned with what their reality might mean to the rest of physics and astronomy. And in the five areas I outlined, I think the reader can see the impact is enormous, perhaps even Nobel worthy. That’s why physicists are having kittens over this.