[Taking place on April 24th, 2016, this was my first session where we used the WebRTC function of Roll20. As with my prior use of audio recording software with Skype, I had found a new tool to record the audio, video and screen events of Roll20. There was roughly two hours of technical difficulties, late player arrivals and the characters were in a combat situation so we got off to a slow start and didn’t accomplish very much in terms of plot. Ralph, Mike, JB and Demo were in attendance.] 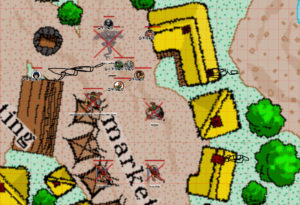 To recap and give a context, our heroes, the elite squad of troubleshooters for the RPA, had fought and defeated the undead cryohydra, Jujex Leather, and her band of well-trained ogre thugs in the village of Matakan. In the process of doing so our heroes discovered Jujex was an ally to a vampire lord named Gulthias. Maceo, the squad’s scholar and historian, had heard a little about Gulthias. According to the history he knew, Gulthias was supposed as destroyed long centuries earlier. 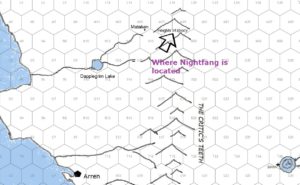 This was a troubling for several reasons. First, the history was wrong; Gulthias was not destroyed! Next, the vampire lord now made his base in the long abandoned and haunted tower, called Nightfang, which was in the pass between the Heights of Idiocy and Mount Consquent, on the northern end of the Critic’s Teeth. This was not far from Matakan and also it was very close to Frickalind Hierophant’s shrine, the Seat of Crondussa, at the summit of the Heights of Idiocy. Finally, further clues revealed from one of Gulthias’ captives, showed that Gulthias had created a cult dedicated to rebirth of the Star Dragon, Ashardalon.

Months beforehand, the Troubleshooters had put an end to the multiversal plot of Lord Ihirijika. During that mission, they had found in Ihirijika’s papers, references to Ashardalon. The Troubleshooters, Hinkwe especially, knew Gulthias’ association with Ashardalon couldn’t be coincidence. So, after the restoration of Matakan, the Troubleshooters returned to Waylon to inform and convince Lady Hilda of a new threat to the Queen’s Peace. Unsurprisingly, Lady Hilda gave them the order pacify the area at their full discretion.

This lead to several days of assaults and repeated hacking and slashing through Nightfang, fighting many undead, constructs and monsters hitherto unseen in Udra. After many hard fights, the tower was cleared. The party then made a brief sally into the catacombs only to encounter strange, magic destroying, spiders the size of horses! Some of their equipment was destroyed by these spiders and the party decided to retreat and regroup. 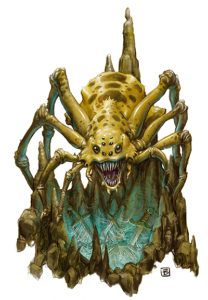 The squad then took twenty days rest in the Queen’s City, Waylon, to regroup, re-equip, heal wounds and train for the push into the vast crypts below the tower. They also learned the spiders they had encountered were called spellgaunts, which were very rare, but highly intelligent and communal creatures that fed on strong sources of magic. The spiders were going to be a problem!

After consuming a Hero’s Feast upon their return, the squad made a careful search of the tower to check they had not missed any loot or useful clues before making a further push into the catacombs. The search found a few minor bits of treasure but no clues as to Gulthias’ location. The Troubleshooters knew this was far from over.

Bussell, Hinkwe and Maceo cast several augmentative and defensive spells on the squad, including Haste, an Inspiring Song of Courage, Extended Nightvision, Bear’s Endurance, Flight and others. Several magic devices were activated including rings of invisibility. Returning to where they had last encountered the spiders, the party decided to keep pushing in that direction. Frikalind used divination to search for sources of evil and undeath and found nothing within the range of her magic. 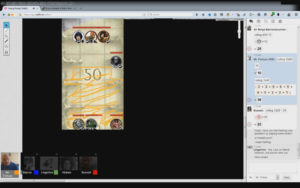 They were confronted with a door in the south of the chamber they were currently in. Maceo, Bussell, Frikalind and Lingerhol drew back about 30 feet to take defensive cover in the alcoves lining the western and eastern walls of the crypt. Betty knelt in front of the door with Hinkwe and Stirge on her flanks. As the one in the squad best trained for such things, Betty Davis carefully examined the door finding it to be trapped and barred on the other side. Both she and Hinkwe heard nothing on the other side.

Hinkwe rolled his eyes with contempt and jostled Betty lightly aside to give the door a small kick.

There was a burst of killing frost, which Stirge and Hinkwe easily evaded. Betty was not so lucky and was badly, but not mortally, wounded. She recovered sufficiently to tap her Chime of Opening and the bar on the other side of the door fell away to reveal a new, much smaller chamber.

Betty searched this with Hinkwe’s help and in the debris and funeral urns found a several sacks with house coins totally in the hundreds, some gems appraised at 20 houses each and two magic potions. These were stashed away in the party kitty. There remained another, very similar door in the south end of the chamber, which Betty found to be barred as well.

The Chime of Opening was struck again only to trigger another trap,  which Betty missed. This was a blast of fire but, she and Hinkwe were both on their guard and ducked behind cover, unwounded. The open door revealed a new chamber very similar to the one Hinkwe and Betty were currently in. Hinkwe stood at the door as Betty went in to search.

As she was concluding her search of the room, and before anyone could act, Betty was stuck all at once from four invisible opponents, suddenly revealed to be spellgaunts. The spider bites destroyed her magic boots and cloak while claws raked her viciously to abrade and bludgeon her. The blood loss was critical. She’d not survive another attack like that!

After the sneak attack, the Troubleshooters sprang into action but the spiders were just a shade quicker. The spider to Betty’s southeast, struck her three times with claws and bite, killing her.

The spellguant to Betty’s southwest, now deprived of Betty as a target, decided to shoot webbing at Hinkwe, hoping to ensnare him, but the elf easily dodged the blast. The ones blocking the door attempted to bite Hinkwe’s magic bow and failed. They batted at him with their legs wounding him lightly.

Maceo saw his sidekick, Betty, fall bloody and still to the floor. He took a few steps to clear his line of sight, briefly considered casting Cacophonic Burst, realized the Burst would hurt Hinkwe too and elected, instead, to cast Haste on the party.

Lingerhol, about 20 feet north of Hinkwe and the room, took a few steps to his left to get a line of sight through the door and, taking advantage of his haste, shot a large salvo of arrows into one of the spiders wounding the creature lightly. 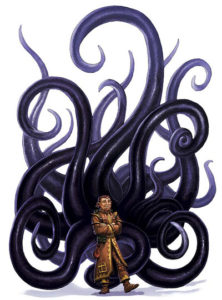 Bussell summoned Black Tentacles to ensnare the beasts in the room. Unfortunately the area of the spell ensnared Hinkwe too regardless, the spellguants were trapped and slowly being constricted by the tentacles great strength. Completing the spell, Bussell Hedgerow, always under the power of a flight spell, floated to one side for cover, saying, “My work here is done.”

Hinkwe, flying and having narrowly managed to break free of the tentacles, floated back about five feet to turn and fire an arrow into the door of the northern room. Hinkwe offered no explanation for this odd behavior but muttered under his breath about Bussell’s indiscriminate and poorly timed use of magic.

Both Frickalind and Stirge simply waited for the tentacles to do their work. The half-orc former pirate pulled out and lit his pipe. They both seemed content to let the Black Tentacles do their slow,  brutal work. The spiders struggled, mostly in vain, to break free of the tentacles which only tightened their grip further.

A spellgaunt did break free successfully but quickly realized that its disjoining bite had no effect on the tentacles.  Instead it tried to scramble its way out of the spell area but, its movement was constrained so it could only struggle out slowly.

Lingerhol fired another salvo of arrows onto the same creature he attacked mere seconds ago, this time the wounds were more severe.  Now that Hinkwe was free of the tentacles and was away from the door, Maceo cast a Cacophonic Burst into the room with spiders. This wound most of them.

Hinkwe decided that waiting to see the spellgaunts crushed to death was too slow. He decided to use his arrows to speed them along to their spidery gods and spidery afterlife. Zap! Zap! This brought down two and wounded a third.

Bussell, followed up with Polymorph Object, turning one of the two remaining spellgaunts into a horsefly, made of stone, the size of a horse. Only one of the spiders remained. Seeing this, Stirge and Frickalind continued to abide.

Or at least they did until the final spider broke free of the black tentacles and strode straight toward Stirge! Who then, with two mighty swings of the Axe of Compassion, cut the spellgaunt into four roughly equal chunks!

Bussell dismissed his black tentacles and the party rushed into retrieve the corpse of Betty.

Clutched, viselike, in her hands were the bits of treasure she’d found in the room before the spiders struck her down–three sacks filled with thousands of gold, a few gems and three potion flasks. The Troubleshooters elected to teleport to Waylon, to the Temple of Montintera, Goddess of Lightning and Mirrors. It was there they hoped to restore Betty by True Resurrection.

This entry was posted in Games, Going Postal. Bookmark the permalink.