Okay watch this clip and be prepared for a lot of ballistic eye rolling.

Okay, so to put this video into context, Sherman, let’s dial the way-back-machine to 1979, Michigan State University and James Dallas Egbert III*  This was when the “D&D is a tool of Satan” myth first started. It was hysteria and stupidity then and nothing has really changed in the forty years since.  And I and millions of other intelligent people are just biding time when Sweet Zombie Jesus calls Pat home.

First, most religious cults are intensely jealous of anything that diverts the attention of youth, especially if those cults don’t control it. Notice that Pat never criticizes television, which is also highly diversionary to the kids. Christian leaders just loooooove TV. And Protestant Evangelicals have been trying for decades for now to create alternatives to pop music. This has largely failed so they continue to demonize pop music.** And, for the same reasons, they have created alternative table top role playing games. Put “Dragon Raid” in a search engine and see what comes up. Dragon Raid pretty much takes a page from CS Lewis’ fantasies and it was never really a big seller so, I guess, Robertson, a dusty, crotchety, hateful, angry, old charlatan continues to drag out this 40 year old myth. 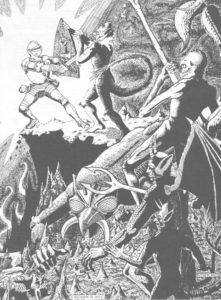 Anyway, there is a more subtle level on which this hysteria is operating on. This is why I think religious zealots really fear D&D: The game and all its imitators and ilk are pop culture versions of college level history, anthropology and comparative religion courses. It encourages teenagers and young adults, just at the age when they are starting to form their own abstract thoughts, politics and ideology, to think about cultures and religions that are alien from their own. It encourages them to do research and create and write up extensive notes to make for more satisfying play and better worldbuilding.

This is intellectual nitroglycerin.

You and your players are creating narratives for invented protagonists within cooperatively created worlds. Think about it: as a D&D gamemaster who has created a very detailed, carefully researched ruined temple of Greek gods for her players to explore, face battles and solve puzzles in, is it really that much of a leap for those players and gamemasters to comprehend that, just as Greek Gods are fiction, to then further conclude that all gods are fiction?

There’s old joke among D&D cognoscenti dating from around the same time as Egbert’s death that encapsulates this idea perfectly:

D&D can’t be a tool of the Devil! My hundredth level paladin killed Satan last week!

That is what I think people like Pat are really afraid of–D&D can help break the spell.

Christians, Muslims, Hindus, Jews, Buddhists, Scientologists and so on should recognize this story because that’s essentially how all their various cults got started.

** Really, they should have quit with “Amazing Grace,” nearly the only gospel tune worth a damn.

This entry was posted in Games, Personal. Bookmark the permalink.