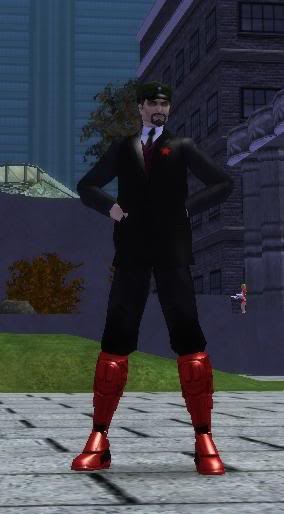 This is an idea I had for character in the game of City of Heroes, a game now sadly deceased. (These days I play Champions Online, based, at least partially on the venerable and wonderful Hero System table-top rules set. CO is a worthy enough effort but, still currently a pale shadow of Paragon City.) Anyway, the idea was so cool I saved it here to use, maybe one day, for a science fiction story. It’s all based around some obscure facts I found on Wikipedia one day about six or so years ago.

Part of this is reprinted at the Virtueverse wiki.

Robot Lenin’s origin is rather complicated–but maybe not by comic book standards!

Robot Lenin is not from the universe of Paragon City (Portal Catalog Cosmonym Alpha Alpha 0-0) but from a universe (Portal Catalog Cosmonym Xi Xi 23-72) with a similar historical background but radically different physics. For example, in Robot Lenin’s universe, magic and psychic forces simply don’t exist and, he has had some trouble getting used to their existence in Paragon City. Nor is Robot Lenin from our real universe (Portal Catalog Cosmonym Pending) either. The history of his Earth departs from ours in 1924, the year of Lenin’s death. His arrival on the Earth of Paragon City is quite by accident. Portal Corporation scientists tuned into his universe in their attempts to seal off alternative routes from the Rikti Universe. Just before the moment of his discovery and transference to the Portal Corporation labs in Paragon, Robot Lenin was aboard a Russian space colony writing a lengthy treatise on the subject of rights for artificial organisms.

How is it possible for a man, who died in 1924 from his third and final stroke, to be found on a space station orbiting Venus in 2085? Let us start with this obscure historical fact from early Soviet history:

In our universe and the universe of Paragon, nothing came of this.

But imagine on the Earth of Universe Xi Xi 23-72 that this project, buried in deepest secrecy and bureaucratic obscurity, was actually put through! What if Lenin’s frozen corpse survived Stalin, World War II, the Cold War, the Cuban Missile Crisis and the Fall of the Berlin Wall. Suppose that the vacuum bottle containing Lenin’s cryonically suspended brain passed out of the hands of a corrupt former KGB officer to a minor party of eccentric Russian techno-anarchists? Imagine they kept this brain cold until the rise of nanotechnology and the precipice of a Vingian Singularity. Now, imagine an android of Lenin reborn in a Russian space colony, armed with Gordeyev 74 piston boots, a Kalashnikov 217 rifle and a few new subversive tracts he’s written, fighting to free all sapient artificial life from the hands of its organic oppressors!

This is a quotation from Robot Lenin’s journal soon after his arrival in Paragon:

My doctors, being good Russian cosmonauts, were quite prideful in telling me that I was the first. I’m the first cryonically suspended patient, a full 43 years before Dr. James Buford was suspended in 1967. I was not the first be revived of course. It was 1924 and the understanding of cryoprotectants was still quite primitive. Krasin and Bogdanov considered a variety of sugars, settling on a mixture of glucose and glycerin. As such the freezing damage to my brain was too extensive for me to join that first wave of revivals in the latter 21st Century. Several reconstructive models had to be tested in software before the cell repair machines were sent into my skull to reverse what damage they could.

Even still, I’m not really sure I deserve the name Ulyanov. After I awoke there were noticeable gaps in my memory of those days. In my former life as a student and later as a lawyer and politician, I practiced extensively to improve my memory so, it was very disturbing to me to find these gaps. My doctors tell me that is sadly unavoidable, a consequence of the primitive freezing process my corpse underwent.

Since then, as a way of filling in the gaps, I’ve looked at photographs of my family, home, relatives and comrades in the struggle. I’ve been re-reading my works, notes and diaries that Soviet historians thought to preserve. This was somewhat successful but some things will remain forever lost to me. I think that many would agree that memory and the reaction to experience are what make a major portion of personality. A child may be born with certain tendencies and favors but change a man’s memory and you change who he is fundamentally. I think the real Lenin died in 1924. I am only a reasonably good copy.

However this leaves me with the situation of who I am and how I define myself in this new life.

But if I was there when Stalin had Trotsky assassinated, if I was there at the purges of the Old Bolsheviks of the 1930s, if I was there at the founding of the NKVD–that was my fault. I decreed the creation of the Cheka. It was civil war but, I signed the orders for the campaign of terror against White Faction sympathizers. In the face of all the repression and death that followed, can I be allowed to change my mind? How do I say that I’m sorry?

I’m not entirely sorry. People forget what the dawn of the Twentieth Century was like. In most industrial countries unions were still illegal, women did not have franchise, ethnic minorities were barely considered human, let alone citizens, most of the world was held in the grip of exploitative, violent empires. Were we entirely wrong? Was I entirely wrong? Was there some justification for what we did in those days of October? We really believed we were trying to make a better world. The road to hell is paved with good intentions.

But now, here I am in a world where all of that seems like ancient history and, I’m not entirely sure I am that Vladimir. Further, I’m now in a world where nearly anything is possible so, to paraphrase the man I’m modeled after: What is to be done?

Robot Lenin looks just as Vladimir Lenin looked in 1917. His android body allows him to appear as a younger man but he forgoes this because he knows the 1917 suit and cap are iconic and easily recognized. He also doesn’t bother to adopt body armor or an outfit suited for greater wear and tear because the smart fabric of his three piece suit is self-repairing and his body is far more durable than his human one ever was. Often the only changes he makes in his appearance is when he carries his AK-217 or when he pulls on his Gordeyev 74 boots for running at high speeds. When indoors, in formal settings, he’ll remove his cap, revealing that he is still bald.

Robot Lenin does not need sleep or food being entirely micromechanical and powered by advanced, solid-state capacitors. His brain is noticeably smaller and more efficient than a human brain and in located in an armored container composed of alloyed diamond in his torso. However due to heat dissipation, size and space for backups, his mind still operates at human speeds. Robot Lenin’s Earth of origin is more technically advanced than most of Paragon Earth’s science. On the other hand, R. Lenin has almost no engineering or technical knowledge and thus can’t repair his more advanced organs should they be damaged.

The strange magic-infused physics of Paragon Earth also plays havoc with some of his micro- and nanomechanical systems. Some of these he has had to replace with less efficient Paragon analogs. Luckily, he is no more or no less susceptible to magic than any other creature of this universe. But his lack of knowledge sometimes drives him to make unsafe assumptions and decisions. For example, he still occasionally forgets that psychically endowed minds can scry on him from remote locations without instrumentality.

His personality is outgoing, charismatic and witty but friends and associates sometime complain that his wit can often be cruel. He is a fiendishly clever disputant and can quickly tear down any opposing position that is not built on rock solid logic. He’s not one to suffer fools and, with many years of experience as a politician, he’s used to having his will obeyed. However, the profound transformation he underwent after his death, the cultural shock of modern technology and his learning of Russian history after 1924 has humbled him. He hasn’t admitted it to anyone but he now feels directly responsible for the deaths and human rights abuses of the Soviet Union. To his dismay, these second thoughts have made him less decisive than he used to be. But, he really hasn’t moved very far at all to the right. He’s still quite skeptical of capitalism believing that automation can free all workers from the dull drudgery of boring, vocational labor. He now vehemently advocates that all sapient creatures, emergent or synthetic, should be given full and equal rights. If necessary, by violent revolution or armed force.

Additionally, as the artificial duplicate of a Vladimir Lenin from another universe, he has taken great pains to distance himself as having anything to do with the real Lenin of Paragon’s Earth, who died and was embalmed in 1924. So far, he has not ventured back to Russia and has loudly and publicly refused all invitations to do so. This he feels is necessary for fear of introducing political upheaval in that country. In the universe of his origin he had exiled himself to space to avoid similar problems with his Russia. His secret motive for doing this was also to plot revolution for the oppressed robots of his world’s present of 2085.

Actually there is a great deal about his Earth that he has yet to explain.

This entry was posted in Games, The Future. Bookmark the permalink.